Phases of an Attack

There is no set time frame for an attacker to complete the cycle, and it is the attacker who chooses when to move forward or backward in stages. The time it takes to complete each stage will greatly depend on a number of factors, such as, type and goals of an attack, experience of the attacker and the victim, to name a few. For example, a snatch and grab robbery may go through Pre-Attack and Attack phases within seconds, but domestic violence may stay in the Attack phase for years.

The diagram below gives a visual of the stages and phases. 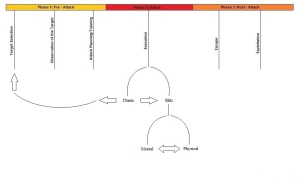 Please follow the links below for details on the stages and phases of an attack.

Introduction to Self Defense